Here is a pickleball article from The Trust for Public Land, December 31, 2019. Thanks to Club member Jim Buckley for submitting this.

I am sharing some information I received regarding some NEW permanent courts being planned for. The person heading this up is asking for our support. Please read the attached letter. Please respond directly to Jeremy Dyche. We want to show support and show Bernalillo County that we WANT MORE courts. He is hoping for lots of names from many players. There also is a meeting planned with County Parks and Rec on 10/24 that you are welcome to attend. Thanks for taking the time to read this and again reply to Jeremy directly.

Jeremy will also have a poster up so you can sign the support sheet at this weekend’s tourney if that’s more convenient. Jeremy will be on hand Sunday at 8am if you have any questions. 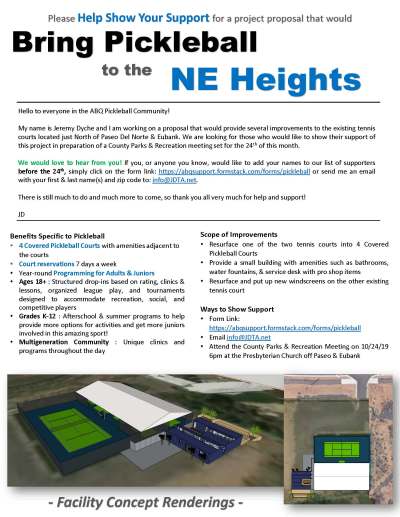 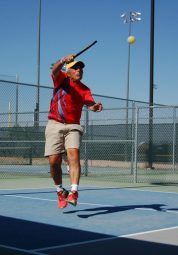 Here is an article from Silver Sneakers (3/26/19 Newsletter) about the health benefits of pickleball. Great read!

“Hey, there’s something wrong with Larry,” someone shouted so loudly Stacy Spell started immediately running. Larry Tucker had stopped breathing between games on the new pickleball courts in Squaw Valley. Cardiac Arrest. Heart Attack. Call it what you like, but Larry needed help – and fast! “I had been playing on the far court and was the last to arrive on the scene,” recalls Stacy. “By then, Larry was slumped in a chair, unresponsive – and no one was doing anything about it.”

According to the American Heart Association (AHA), 70% of all cardiac arrests occur outside the hospital environment. This means the first responder isn’t typically trained medical personnel. Luckily for Larry, Stacy is a CPR-certified fitness industry professional trained in emergency protocols and CPR best practices, which currently recommend hands-only compression CPR.

Stacy quickly jumped into action, asking for help to get Larry to the ground as she checked his pulse. “No breath, no pulse, ash grey – I knew he was gone,” she recalls. “I immediately started chest compressions, then called out, ‘Who’s called 911?’” Everyone thought someone else had called. Stacy asked for someone to stand in front of her and make the call immediately. If you’ve ever called 911 in a true life-threatening emergency you know it can feel like a long time before help arrives. That day, it took even longer because the EMTs didn’t know where to find the courts. “It seemed like at least five minutes,” recalls Stacy.

When Stacy’s arms started to fatigue, her husband Tom put his hands over hers to take over the compressions. “Finally, 911 arrived, and it was like a ballet,” says Stacy. “No words needed, all had their duties. Tom didn’t stop though, until a trained pair of gloved hands gently glided over his to take over. The EMTs then shocked Larry with an AED and prepped him for the ambulance ride.”

A few stents and bypass surgery later, Larry posed with Stacy on the pickleball court. One year and one day after the heart attack, he was playing again! “What stands out to me is that no one knew what to do and, if Stacy had not stepped in with compression-only CPR skills, Larry wouldn’t be here today,” says Sue Smith, a pickleball player who was also in Squaw Valley that day. Stacy doesn’t deny that she was in the right place at the right time with the right skills – and it made a big difference. But, she is quick to add that these are skills anyone can easily learn – and every pickleball team should have. “You don’t have to be CPR-certified to make a difference,” says Stacy. “You can learn a lot just by watching the American Heart Association’s 90-second video, “Hands-Only CPR for Cardiac Arrest Victims 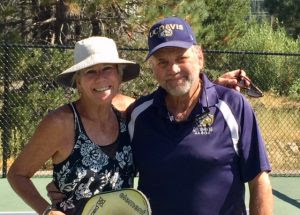 Morgan Aguilar of KOB Eyewitness News visited Los Vecinos Community Center today and in addition to interviews and video, actually played some pickleball herself in borrowed tennis shoes. The story is planned to air on KOB 4 Eyewitness News tomorrow morning and evening (January 23). Tune in!

Here is a letter from our ABQ Pickleball Club members and friends, Mary and Melody, about their recent trip to Houston to deliver donations and volunteer to assist victims of Hurrican Harvey.

Prior to our trip, we were in contact with the director of a Texas Crisis Center near Houston who called us with a wishlist of specific items in demand that were not being received with the numerous donations from organizations such as Red Cross. Items like toddler pull-ups, adult depends, combs, food cans with easy-open tops, travel sizes of toothpaste and shampoo and non-electric can openers. We stocked up from three stores, loaded everything in our RV and drove a little over 2 days to arrive in Conroe. Luckily, the director met us on a Saturday, and she was overwhelmed with our donations. In Harris and Montgomery counties, most folks have been relocated to temporary housing or motels, but people are still struggling. This shelter, which does its own fund raising also supplies food, toiletries, clothing, along with assisting in placement and FEMA enrollment. The only requirement for receiving items from this shelter is a FEMA number, and they will help any flood victim. While we were there, we met a couple who lost their entire house and contents. The young woman was pregnant and due any day. Although they had a voucher for shelter, when they arrived, they were told the shelter was full and nothing more was available to them. Their church is now helping to house them and rebuild their house. Their car had been sitting in three-feet of water but “miraculously” it started so they were able to push it with flattened tires out of the water. Although they are currently driving the car, the young man is convinced that it will not last very much longer and his only means of transportation will disappear.

After this delivery, we went to the nearby local animal shelter. During the acute phase of the hurricane, lost animals were held at the Montgomery County Fair Grounds or people fostered them. Now most have been reunited with their owners, but some are still awaiting their permanent homes. The current shelter building is modern, clean and was very busy when we were there. The staff was extremely appreciative of the towels, cleaning supplies, treats, dog and cat food we were able to give them after your much-appreciated cash donations.

We are so touched by all of YOU and your giving spirit. With all the horrible disasters happening in our country and island territories, we felt like we should do something positive to impact some of the victims. We greatly appreciate YOUR kind and generous participation in this endeavor.

In Much Gratitude,
Melody Childs and Mary Pruess aka
“M & M” and “The Ms” 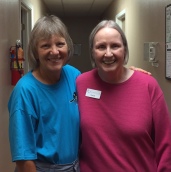 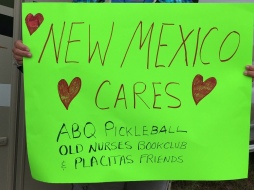 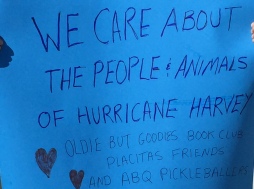 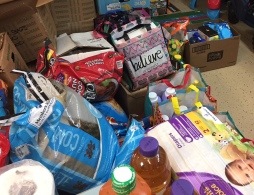 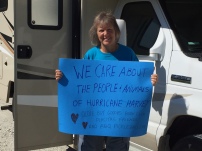 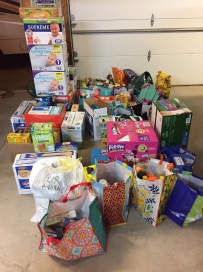 Without a doubt, the best way for you to keep improving is to play with better players. It forces you to play at the top of your ability, makes you pay for your mistakes, and puts you on the fast-track to a higher skill level.

But if you attempt to only ever play with players who are better than you, then you are, what I call, a pickleball snob, and I believe it will cost you.

Remember, someone took you under their wing when you first started playing, so pay it forward and make a point to regularly play with players who are weaker than you. Perhaps you regularly play a warmup game with them, or once a week you decide to dedicate the last half of your play to playing with them. Not only does it build community, it also helps raise the general level of play.

If players ask to play with you, and you opt to play a higher-level game, let them know when you WOULD be willing to play, perhaps later in the day, or later in the week.

Don’t be patronizing—or overly aggressive. Instead of focusing on who wins or loses, find a way to make it challenging for yourself. Pick a shot you want to improve upon and focus on hitting that shot. Or, try to reduce your number of unforced errors. Focus on keeping the ball in play rather than slamming every put-away shot.

Consider how YOU’D like to be approached when lower level players ask to play with you and approach the better players that way.

Pickleball is latest racket in town – Here is a Santa Fe New Mexican article about pickleball in New Mexico.